Another Zhejiang Democracy Activist in Custody for “Subversion”

Less than a month following the August 13 arrest of Lü Gengsong (吕耿松) on “subversion of state power,” another core member of the China Democracy Party’s Zhejiang Committee, Chen Shuqing (陈树庆), was detained on the same charge.

Chen’s wife, Zhang Donghong (张东红), told HRIC that at 3:30 p.m. on September 11, Domestic Security officers from the Hangzhou Public Security Bureau conducted a search at the couple’s home, and took away a desktop computer, a mobile phone, documents, and some badges, without leaving a list of the confiscated items.

Another source told HRIC that Chen himself was taken away by Domestic Security officers at around 1:00 p.m. the same day. The detention notice from the Hangzhou Public Security Bureau lists 6:00 p.m. as the time of Chen’s detention.

Previously, Chen served a four-year sentence for “inciting subversion of state power” in connection with his role in organizing the China Democracy Party’s Zhejiang Committee and articles he wrote calling for democratic reform. He was released in September 2010 and soon resumed his activism. In November that year, he was among six individuals who applied to the Hangzhou Public Security Bureau for a permit to hold a demonstration to call for democratic reform. In 2014, he signed a joint public statement urging the release of detained individuals, and published an account of Lü being denied access to his lawyer while in detention.

Chen was a participant in the 1989 student movement, and began his pro-democracy activism in 1995. He became involved in the preparatory work for organizing the China Democracy Party in 1998, for which involvement he was detained for four months in 1999. 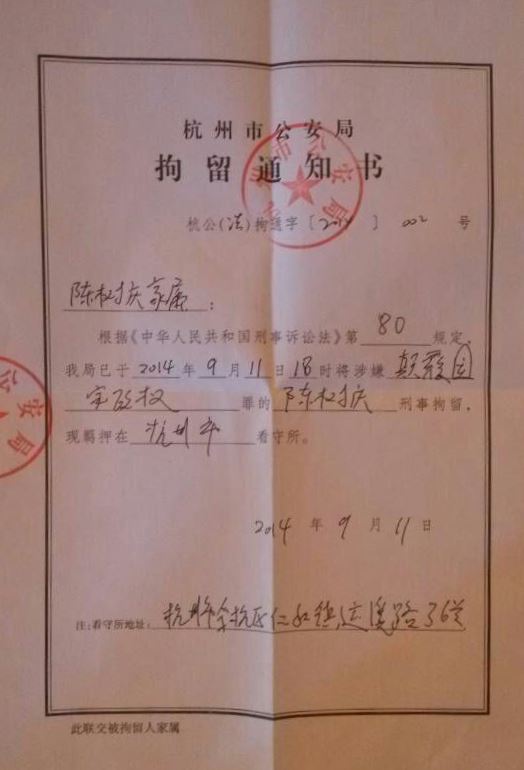