Hu Ping’s painful experiences as a middle school student and sent-down youth in the 1960s and early 1970s lie in the background of this book, but he mentions them explicitly only once, describing himself during the Cultural Revolution as having been “a pious disciple of official ideology1

But it is clear throughout the book that he shared with almost all intellectuals of his own and the previous generations the protracted, painful experience of struggling to make himself believe the Party’s truth, and what is in retrospect perhaps even more painful, of succeeding for a long time in that endeavor. Now that the Party has abandoned its old truth, Hu Ping and other thoughtful Chinese continue to struggle with the question of how it was possible for so many intelligent people to subscribe so fully to a false ideology.

The “thought remolding campaign” of Hu Ping’s title is not any single campaign, such as the zhengfeng (整风运动)2movement of the 1940s, the campaigns against liberal intellectuals in the 1950s, or the Cultural Revolution. It is the whole history of the Communist Party of China’s effort to control the beliefs of the intellectual class during the period of Mao’s rule from 1949 to 1976. Nor is it entirely a past history, because as Hu points out, the phenomena he describes continue today in attenuated form. The puzzle Hu Ping probes is why it was possible for this thought remolding campaign to succeed so fully for so long.

His answer has two parts. The first concerns the techniques the Party used to gain control over the minds of its targets. The core technique obviously was punishment of various kinds, which induced fear. But fear alone does not produce belief. The Party trapped its victims in a pseudoscientific epistemology within which “truth” was monistic—there could be only one truth—and anything deviating from truth was error. It deprived them of alternative sources of information and opinions. Then it added social isolation, so that an individual could find no support for deviant beliefs even in private among friends and family. It then kept changing the truths to which it demanded loyalty, creating an environment of constant ideological uncertainty so that the individual never reached a secure position of belief. Finally, it tragically took advantage of people’s best nature—of their natural desire to believe in some deeper meaning in life—to persuade the intellectuals that in suppressing their own freedom of thought they were contributing to a project more valuable than their own intellectual integrity.

But the more original and important part of Hu’s analysis lies in his empathic, multilayered account of the emotional processes involved in bringing oneself into accord with the Party’s demands. This is a book by a philosopher, because philosophy helps him to identify the logical flaws in the beliefs that intellectuals were forced to accept. But even more it is the book of a psychologist, because the central puzzle of the book is why people went beyond complying with the Party’s demand for conformity to authentically believe in absurdities.

Hu anatomizes the psychological mechanisms at work in such a process of belief. Forced to voice the official line by fear of coercion, people would preserve their sense of dignity by persuading themselves that their belief was authentic.6 People found strange comfort in publicly denouncing themselves because the process of doing so helped them escape the position of victim to identify however partially with their oppressors.7 People were able to feel more ideologically advanced by confessing to being ideologically backward.8 Above all, Hu Ping points out, “when fear has intensified to a certain degree, and when coercion has persisted to a certain phase, we often forget about the existence of fear and coercion at a self-conscious level. . . . [W]e consequently no longer set foot in such a forbidden zone and thus we no longer feel afraid.”9 In short, “[B]ecause we did not dare to doubt Mao’s ideas, we never doubted them”10

Once having acceded to the Party’s demand to believe, many people found it impossible to free themselves from those beliefs even after Mao’s death when the Party itself no longer demanded that they believe them. Quoting an old Chinese story, Hu Ping calls this “the chastity of those who have lost their chastity.”11 Many who were rehabilitated after twenty or more years of cruel mistreatment were unable to feel anger for how they were treated because the mistreatment itself had led them to accept the historical rightness of the Party. Others convinced themselves that they could do more to reform and liberalize the Party by continuing to accept its ideology, even as that ideology changes. As Hu points out, it is paradoxical that these “within-system” intellectuals have decided to forgo freedom in order to fight for freedom. 12

Hu’s insights into the transition from coerced conformity to belief remain relevant even today, when the Party’s ideological demands are much reduced, its control of information compromised, and its willingness to punish people weakened. Chinese intellectuals have not forgotten the lesson of June Fourth: it is dangerous not to believe. This helps explain why many Chinese actually chose—whether they do so consciously or not—to accept claims by the regime about its legitimacy that at the same time they know in their rational minds to be false.

Among Hu Ping’s most incisive insights are his comments on why it is so hard to break the silence, and why people stand by when they see dissidents unjustly persecuted. It is a classic case of the free rider problem: when resistance is costly, only a few courageous (or stubborn) people will engage in it. This is understandable from a rational-choice point of view. But, as Hu Ping points out, “a person has to take responsibility for the very act of . . . voluntarily forfeiting his individual responsibility.”13

Hu Ping points to the paradox that the Party punishes many of its critics by exiling them. Why is exile not a gift for those who, after all, yearn for liberal democracy? Hu’s answer is that the exiles lose their access to the project they care most about—the democratization of China—and have to assimilate to a society that they find profoundly foreign despite its ideological conformity with their preferences. To be released from the prison of China to the freedom of the West “is actually a form of punishment”—a form of punishment Hu Ping himself has endured since 1986, for almost three decades.

Hu Ping was a student of Western philosophy at Beida and then at Harvard. His book draws frequently on insights from thinkers East and West, ranging from Sophocles and Aristotle to Kant, Mill (his own academic specialty), Hegel, Marx, Solzhenitsyn, Arendt, and contemporary social scientists including Mancur Olson, Albert Hirschman, and Francis Fukuyama.  But this does not make his inquiry forbiddingly scholastic. It is a dialogue with the reader, written in a thoughtful, deliberate, and conversational tone, and leavened with numerous gently humorous Chinese proverbs and fables. The easy tone of the original Chinese text does not come across fully in the rather literal translation, but the English version is accurate and clear.

Hu Ping has lived in exile since 1986 (disclosure: he and I are both board members at Human Rights in China). He has contributed a constant stream of articles to pro-democracy magazines and websites, emerging as one of the most important contemporary Chinese political thinkers, widely respected among Chinese intellectuals at home and abroad despite the ban on his works in the People’s Republic of China.

Despite the punishment of exile he has suffered, Hu Ping believes—and demonstrates by his work—that the human desire for dignity cannot be extinguished.14 So long as the authoritarian rulers cannot stifle the voices of freedom, he says, “they have lost”; so long as the advocates of freedom have not lost, “they have won.”15 This book offers a rare opportunity for the English language reader to understand the thought of one of the most respected and courageous philosophers of China today.

2 Zhengfeng Yundong (整风运动), also known as the Rectification Movement, was an ideological campaign carried out by the Chinese Communist Party from 1942 to 1944. During the campaign, the Party attacked intellectuals in an attempt to replace the culture of the May Fourth Movement with that of Communist culture. More than 10,000 were killed. 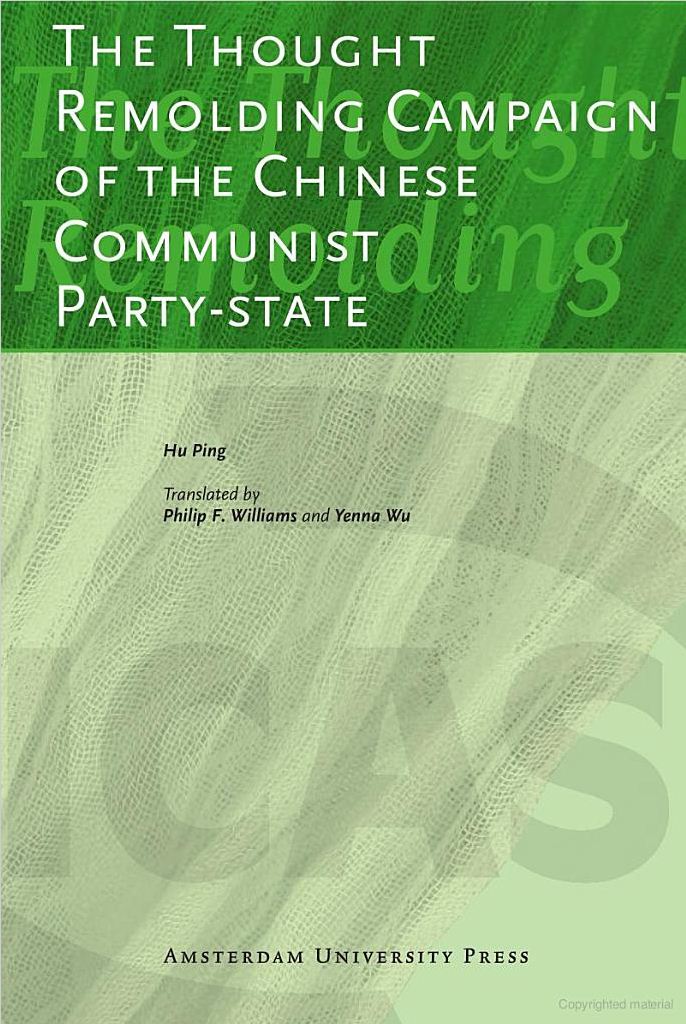 Andrew J. Nathan (黎安友) is Class of 1919 Professor of Political Science at Columbia University and chair of the steering committee of the Columbia University Center for the Study of Human Rights. He is the chair of the board of Human Rights in China, co-editor of The Tiananmen Papers and How East Asians View Democracy, and coauthor, with Andrew Scobell, of China’s Search for Security.