My interest in China started in the 1980s, when I was growing up in Western Kenya, where kung fu movies as epitomized by the famous Bruce Lee and Jackie Chan were the only window into Chinese culture, values, and traditions. As a child, I immensely enjoyed these movies, and believed that all Chinese were kung fu fighters out to seek revenge for every slight committed against them. “You killed my father, I will kill you!” was the memorable line from most Chinese movies we watched as children.

I wanted to be the Jackie Chan of Africa. This led me to enroll in a martial arts class. I quickly learned all there was to learn from my fellow African instructors and felt a need to get a Chinese kung fu “master” in order to obtain the highest possible training. Chinese nationals were a rarity in Africa at the time, so I thought of visiting China and started studying its history, people, culture, and way of life. But from the limited Information available at the time, I discovered that, as a socialist country, China was a closed society—even more so to me because of the language barrier—my interest quickly waned.

China came to Africa in the 1990s. In the beginning of that decade, Kenya’s economy hit bottom as a result of bad policies. Foreign donors froze aid programs, and corruption was eating up whatever little money the government had. Our roads were dilapidated, hospitals nonexistent, schools broken down, and public amenities diminished. The Chinese government offered to rebuild roads in downtown Nairobi. To do so efficiently, they brought Chinese nationals who could barely speak a word of English. At last, I could observe Chinese close-up!

I was amazed at their work ethic. They were single-minded in their work, did not take time off, and worked day and night in shifts, Monday through Sunday. To an African this was astounding! It was as if they worshipped their work. The results were just as amazing. All the roads were completed in astonishingly short time, and they were well-tarmacked, strong, and durable.

Before I had been curious about China, now I was hooked on China!

Meanwhile, The Chinese embassy set up a department for the promotion of trade and development in Kenya. Its purpose was to encourage bilateral business relations. It was apparent, however, that the balance of trade leaned heavily in China’s favor. There was an influx of cheap Chinese-made goods that slowly but surely started eroding our industries.

Many more Chinese government sponsored projects, mostly building of roads and bridges, continued to crop up. And with them, more and more Chinese came—workers, businessmen, women, shopkeepers, hawkers, and hustlers. So many of them, legal and illegal! This has resulted in increased contact between Chinese and Kenyans, sometimes causing friction. In the past, Kenyans’ only contact with foreigners was always with people from the West whose value system they understand as a result of colonialism. Now, suddenly, they find themselves dealing with a people whom they hardly understand. This lack of understanding has often left many Kenyans holding the short end of the stick. An example is a case widely covered in the media in 2012, in which Chinese workers were accused of impregnating Kenyan girls and hightailing back to China, leaving behind ostracized mothers.

Africans are a trusting people. Unscrupulous Chinese businessmen have taken advantage of this fact, leaving many would-be millionaires poor. These unscrupulous Chinese engage in illegal activities—mainly poaching and mineral extraction—while hiding behind the mask of language barrier, feigning ignorance of local customs, traditions, and norms. This has led to a general perception that Chinese have no honor, are selfish and self-centered, and do not care about laws, local or otherwise. 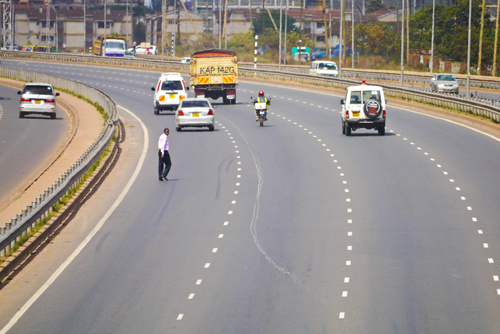 At the same time, Beijing’s presence in Kenya has been beneficial to Kenyans. The new roads have sped up business. Take the Thika Superhighway. Previously, it took one hour to drive a distance of 50 kilometers. It now takes 30 minutes! Hospitals and other social amenities sponsored by the Chinese government have sprouted up in underserved communities, bringing much needed relief to them. Bridges linking critical geographical areas have been built to provide access to previously unreachable places.

But in time, it became clear to Kenyans that the ultimate aim of these infrastructure projects is to facilitate mineral exploration and natural resources extraction in order to feed China’s insatiable appetite for resources. In that case, the important question for Kenyans is whether the Chinese presence in Kenya is in fact beneficial to Kenyans in the long run.

The first time I met English speaking Chinese—two gentlemen and one lady—was in 2005, when a friend introduced me to a center in Nairobi, where the Chinese Embassy was encouraging Kenyans to know more about China. We quickly became friends. I offered to show them around during their free time, took them to places ordinarily a foreigner would not go to, acted as their chauffer when their driver took a day off, and generally hung out with them. This gave me an opportunity to ask all those nagging questions about China that had been eating me up all these years.

I found them hesitant and not quite as open as Westerners, especially on probing questions about their government, freedom of expression, freedom of association, freedom of worship, press freedom, etc. They were, however, ready to talk about topics such as their culture, way of life, and family values, and even shared their food; they would occasionally invite me for dinner at their house.

In time, our friendship developed a business dimension. One of the Chinese’ vehicles was involved in an accident and they did not know how to pursue the insurance claim. As an insurance underwriter, I knew what was required. I offered to handle the matter for a fee. I followed up with the insurance company, provided all the required documentation, and ensured the check was issued promptly. The Chinese were quite happy. This cemented our relationship. I advised them on other insurances that they needed and they followed my suggestions. An insurance brokerage business that I am currently running was born.

Through this center which was promoting bilateral business relations between Kenya and China, I also came in contact with other Chinese who were visiting Kenya for business purposes. Most could not communicate in English. I had always wanted to learn the Chinese language; I now had a practical reason to do so. I set out to find an institution that could offer learning in Chinese language, culture, and way of life.

The Confucius Institute, Beijing’s way of opening up China to Africans, turned out to be an ideal destination.

My fellow Kenyans taking classes at the Confucius Institute were there because they realized their weakness in dealing with the Chinese especially when it came to communication. Most were motivated by business opportunities in China.

Before joining the University of Nairobi to get access to the Confucius Institute, I had had several episodes of dealing with dishonest Chinese who said one thing but meant quite the opposite. These encounters left me baffled, frustrated, and angry. I knew I needed to understand how a Chinese mind works. Through the Confucius Institute, my understanding of China has been greatly broadened as I learn the language and gain deeper knowledge of Chinese culture and way of life. I have come to realize that Chinese are to a great extent shaped by their oppressive government, and have perfected the art of saying what they do not mean and meaning what they do not say!

The Confucius Institute at the University of Nairobi is a Chinese government-backed cultural institution. It is well equipped, technologically advanced, and adequately staffed to provide the best learning experience to interested Kenyans.

As with most African students in this institute, I had a tough time there. To start with, Chinese language is nothing like English. The grammatical structure of a sentence is like an upside down pyramid. As if this is not enough, learning to read and write characters is an exercise in artistry, requiring mathematical precision of memory, flamboyant strokes in execution, and soaring imagination in presentation. The difficulty is compounded by the fact that the teachers who are mostly Chinese do not seek to interact or understand Kenyan way of thinking.

As a result, the dropout rate is something like 80 percent. The typical pattern is this: In a beginners’ class of 50 students, 30 would drop out during the first semester; 10 of the remaining 20 would plod on, eventually dropping out after two or three semesters; and the final ten would make it through—being enticed by incentives like free scholarships to study in China, etc.

In my view, three main reasons account for the high dropout rate:

This is a bleak picture for the Africans trying to learn Chinese and understand Chinese culture. But it does not mean that Confucius Institutes and Chinese people in Africa, especially my country Kenya, have failed to achieve their aims. Far from it, like everything Chinese, the great hand of time will turn what they do into a roaring success. Every African with a view to the future sees the ever-increasing presence of Beijing in African affairs. But while China is becoming more and more entrenched in Kenya and appears eager to bring its culture to Africa, the Chinese people here have shown remarkably little interest in Kenyan—and African—culture, and, indeed, in the African people, except where they stand to gain by exhibiting such an interest.

Still, Chinese-speaking Africans will be greatly needed to help Beijing in its relentless march in harnessing African resources. From a purely economic perspective, Africans who desire to climb the economic ladder will come to the realization that learning Chinese gives them a great leg up. And when they do realize this, they will find these fully-equipped, properly-staffed, and strategically-located Confucius Institutes waiting to receive them.

Beijing is coming to every corner of Africa. Despite its quiet, unobtrusive, and unaggressive appearance, it is definitely alive, breathing down the neck of every child, mother, father, old man, and old woman. It is patient, calculating, manipulative, slowly turning Africa around, and tapping the continent’s resources, wealth, and people to drive its agenda!

Augustine Masiga (奥古斯丁•马西加) is a Kenyan living in Nairobi. A professional insurance underwriter, Masiga is also a freelance writer and has published articles in various magazines and on websites since 2010. He is currently pursuing Chinese language studies at the Confucius Institute at the University of Nairobi.