A cautionary tale and call for animal protection legislation 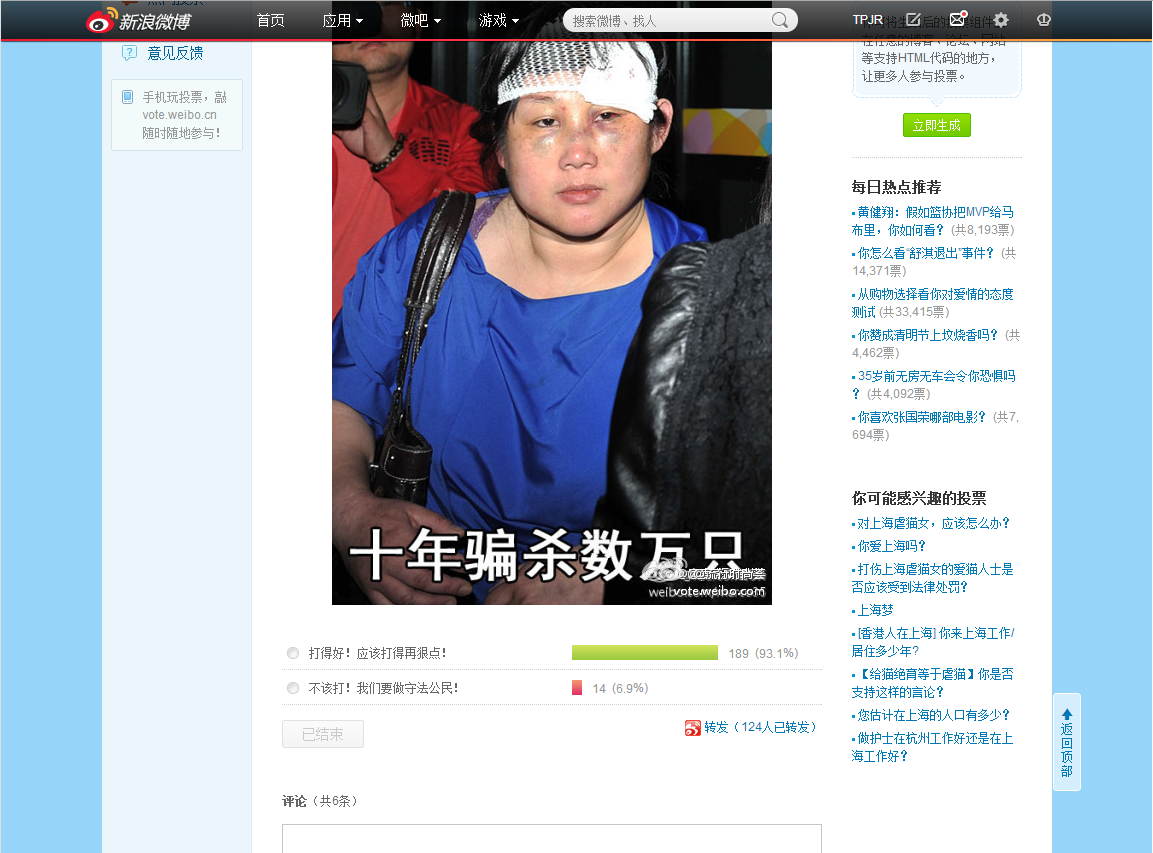 Zhou’s case continues to generate vigorous Internet debates, including diverse responses to several online surveys soliciting opinions regarding the treatment of Zhou the need for better animal protection legislation. A recent weibo survey posed the question “Should the people who attacked Zhou be punished by law?” As of December 28, 2012, 11:16am (EST), 13,058 (52.5%) say yes, and 11,830 (47.5%) said no. Zhou ‘s case is a potent example of the opportunities and complex challenges presented by expanding social media platforms such as the microblogs. As Chinese citizens connect online to mobilize collective action and call for legal reforms, there are also examples of human flesh search engines that can result in violence and serious impacts on the lives of those targeted. A July 2012 Southern Television Guangdong (TVS) program shows the damage to Zhou’s home, physical injuries, and includes experts saying her psychological problems would probably be exacerbated by the loss of her job. At the end of the program, the host cited U.S. law and called for the passage of an animal protection law.3

While China has legislation safeguarding land-based and aquatic wildlife,4 it presently lacks legislation protecting animal welfare generally or preventing cruelty to animals. In September 2009, animal rights activists and legal experts began circulating a draft Law on the Protection of Animals5 and a draft Law on the Prevention of Cruelty to Animals6 for the State Council’s consideration in 2010.7 These drafts included provisions prohibiting the sale and consumption of the meat of companion animals8 and required that the slaughter of livestock “be carried out in a manner which causes the minimum of physical and mental harm to animals.”9 Neither draft was ultimately included in the 2008-2013 National People’s Congress legislative agenda, making 2014 the earliest that the process by which a draft becomes a law might begin.10 However, to be effective, any animal protection legislation promulgated must be supported by a society that respects the dignity and rights of all its members.

In the absence of sufficient legal protection for animal welfare, professional and volunteer animal rights activists and animal lovers across China continue to use traditional and online networks to increase awareness. Activists, advocacy organizations, and celebrities have organized and participated in public awareness campaigns calling for a ban on the consumption of sharks’ fins,11 the wearing of fur clothing,12 and live animal performances.13 At the same time, members of popular microblog networks such as Tencent QQ Weibo and Sina Weibo condemn restaurants seen advertising dog or cat meat,14 report instances of animal abuse,15 alert potential rescuers of companion animals being shipped for slaughter,16 and raise funds for the medical treatment and housing of rescued animals.17 Below are two examples of effective citizen actions also deploying traditional and social media platforms -- one that raised a public outcry and blocked the public listing of a company involved in extraction of bear bile; and stories of successful rescues of dogs and cats bound for slaughter for food or their fur.

In traditional Chinese medicine, the bile of Asian black bears is prized as an unparalleled detoxifier, vision enhancer, and promoter of liver health and virility.18 The demand for this treatment has resulted in hundreds of farms across China where black bears are confined in small cages for the regular harvesting of their bile.19 While the collection of bear bile has arguably progressed -- from outright slaughter to obtain a bear’s gallbladder to the modern practice of milking the bile from a live bear via a catheter20 -- it remains a painful process that can cause both physical and mental health complications.21  The process is so inhumane that it has gained the attention of both international and domestic advocates. Animals Asia Foundation, an international charity headquartered in Hong Kong, has run extensive public education and advocacy campaigns and offers sanctuary to rescued bile farm bears at a center in Chengdu,22 and animal protection groups and activists across China have called for the end of bear bile farming.23

The success of the traditional and online campaigns was evident when China’s largest producer of bear bile,24 Guizhentang Pharmaceutical Company (福建归真堂药业股份有限公司), attempted to go public on the Shenzhen stock exchange in February 2012. Animal lovers and rights activists were ready to jump into action, including a Chinese wildlife journalist from Yunnan TV Network who posed as a tourist and covertly filmed painful-looking bear bile extraction which she then posted online.25 The video was widely circulated and was in stark contrast to the “easy, natural and painless as turning on a tap” process for retrieving the bile described by head of the China Association of Traditional Chinese Medicine, Fang Shuting (房书亭), a bear bile supporter.26

After Fang’s patently misleading comments, Beijing Loving Animals Foundation (BLAF) (北京爱它动物保护公益基金会) released an open letter protesting the public listing of Guizhentang to the China Securities Regulatory Commission. This public letter was also jointly signed by the Capital Animal Welfare Association (首都爱护动物协会), Green Beagle (达尔问自然求知社), and 72 activists, lawyers, academics, artists, and others.27 Within less than one day of being posted on the BLAF’s Sina Weibo, it had been reposted over 4,200 times.28 Two weeks later, activists organized a demonstration protesting the Guizhentang IPO outside a Guizhentang retail shop in Shenzhen, Guangdong Province. 29 A journalist with Shaanxi-based daily China Business also made a trip in late February to Guizhentang’s Quanzhou bear farm to investigate the truth of Guizhentang’s “painless” bile milking procedure, resulting in an exposé photo report that was reposted over 10,000 times by Sina Weibo users.30 In an apparent victory for the advocates, as of November 2012, Guizhentang has not gone public and the company states that, though it still plans to, there is no timetable for doing so.31

Recent attempts to prevent the slaughter of cats and dogs for food or fur offer another example of China’s growing online animal advocacy. In the absence of protective legislation, animal rights activists have mobilized to rescue animals before they can be sold or slaughtered. When netizens see animals being transported or prepared for transport, they alert the animal rights community so that nearby advocates can rush to block the delivery. The activists then, at times in conjunction with local authorities, try to negotiate the animals’ release. Often this requires paying for the animals, even in cases when they were previously stolen. 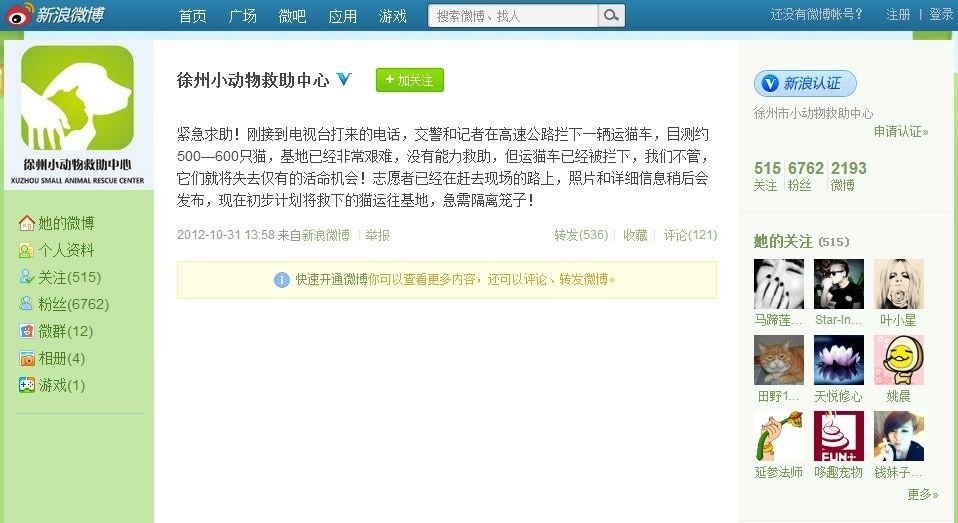 (We) just received a phone call from a television station telling us that traffic police officers and reporters stopped a truck carrying cats on the highway and found approximately 500 to 600 cats inside. It is very difficult for our center to take and rescue more cats. However, the truck carrying the cats was stopped. If we do not rescue them, they will most likely lose their only chance to survive! Volunteers are on their way now to the take photos and gather detailed information that will be released later. Our preliminary plan is to ship the cats to our center and we urgently need cages to separate the cats.

One typical rescue arose in April 2012 when volunteers found a number of purebreds, some still wearing collars, among 500 dogs rescued in Kunming, Yunnan Province.32 Another occurred in October 2012, when a police officer from Jiangsu Province happened upon a truck carrying a load of cats during a routine inspection.33 A local journalist notified the Xuzhou Small Animal Rescue Center (XSARC) (徐州小动物救助中心, “http://weibo.com/helpthems) of the situation, and volunteers rushed to help.34 The transporter refused to release the cats without compensation, and the XSARC volunteers and police negotiated the sale of the cats from 5,000 yuan to 3,500 yuan.35 The volunteers transferred the cats to their center and as of writing are in the process of separating them, treating them, and soliciting donations and assistance for the estimated 400 cats rescued.36

More unusual was the January 2012 rescue of over 1,000 dogs in Chongqing. Volunteers from the Chongqing Small Animal Protection Association (重庆市小动物保护协会, http://www.cqsapa.com) were alerted that a truck carrying dogs had been stopped by police as it was exiting Chongqing and hurried to meet it.37 With the assistance of the police, media, local animal quarantine bureau, and two lawyers who work to protect animals’ rights, the CSAPA were able to rescue the dogs without paying the seller anything at all.38

With rapid and widespread communication offered by over one billion mobile phones users39 and over 400 million registered weibo users,40 animal welfare activists have powerful tools to spread information, organize collective actions to inform public debates and opinions, and improve the treatment of animals. The experience of animal welfare activism will certainly contribute to strengthening Chinese citizens’ participation and this is good news for building a compassionate and rights respecting society. However, the lack of legislation protecting animal rights or prohibiting animal cruelty in conjunction with a strong and vocal online animal rights community can also result in violence as seen in the case of Zhou Ying. An important lesson in going forward points to the critical importance of non-violence and respect for the rights of others while advancing targeted social action goals.

The Chinese Animal Protection Network is China’s oldest network for animal rights and protection, with 180 member groups across China. Its projects include Animal Rights in China

(动物权利在中国) and its online encyclopedia of animal rights and protection, APpedia  (动物权利在中国); POV (Pioneer of Vegetarian) China, which provides information on a vegetarian lifestyle for Chinese families; and Chinese Companion Animal Protection Network (伴侣动物保护网络), a network for groups and concerned  individuals first formed to stop the practice of eating cats and dogs.

Don't Eat Friends is a Beijing-based volunteer-run NGO that promotes compassion for humans and animals both, animal rights, and vegetarianism. In addition to running a small shelter, Don’t Eat Friends is known for their volunteers' charity concerts.

6. “Law of the People’s Republic of China against Cruelty to Animals (draft proposal)” [《中华人民共和国反虐待动物法》(专家建议稿)] (hereinafter, Cruelty Law Draft), http://www.china.com.cn/news/law/2010-03/17/content_19623441.htm; An English translation by representatives from the Royal Society for the Prevention of Cruelty of Animals and the Chinese Academy of Social Science Institute of Law is available at: “Prevention of Cruelty to Animals Law of the PRC (Experts’ Draft Proposal),” March 1, 2010, http://aldf.org/downloads/ChinaCrueltytoAnimalsProposal3-10.pdf.^