Passing the Torch of June Fourth: Demanding Accountability for the Past, Claiming a Democratic Future

In May-June 2009, in Hong Kong, students and artists in their late-teens and early-20s organized the P-at-Riot: June Fourth Festival for the Post-80s Generation (80後六四文化祭)—a cultural festival commemorating the 1989 Democracy Movement in China and paying tribute to the victims of the subsequent military crackdown. The festival was organized for youths and by youths, and propagated mostly via the Internet.1 “To us, June Fourth is not just a part of history that we are waiting to be redressed, but an attitude that can be passed down to the next generation,” the organizers wrote. In their ten-point manifesto, they vowed to “embrace history and continue the fine values of the past in the future” and “keep their voices open and speak frankly of any injustice.”2

All the organizers were born after the tragic event and grew up with a school curriculum that downplays both the 1989 Democracy Movement and the June Fourth crackdown. But now they are joining their parents and parents’ parents who have supported, for more than two decades, the call for official accountability and justice.

On May 21, 1989, one day after martial law was declared in Beijing, Hong Kong people took to the street to show their support for the democracy movement protesters on the mainland and voice their opposition to the government’s harsh response. An estimated 11,000 people gathered first at Victoria Park on Hong Kong Island,3 a major public gathering site, growing to over 1 million as they marched to the Xinhua News Agency office,4 the de facto representative of the Beijing government during Hong Kong's colonial era. During the protests, the Hong Kong Alliance in Support of Patriotic Democratic Movements in China was formed in solidarity with the Democracy Movement in mainland China.

On June 3, 1989, Chinese leaders ordered the People’s Liberation Army to clear Beijing’s Tiananmen Square, where protesters had gathered, to prepare for a military crackdown. In the early hours of June 4, the troops opened fire on unarmed students and civilians in the square and surrounding areas. According to an internal document, more than 2,000 people died in Beijing and other cities on June 3 and 4 and the days immediately following. As the crackdown was widely covered in Hong Kong’s local press,5 Hong Kong people marched again on June 5.6 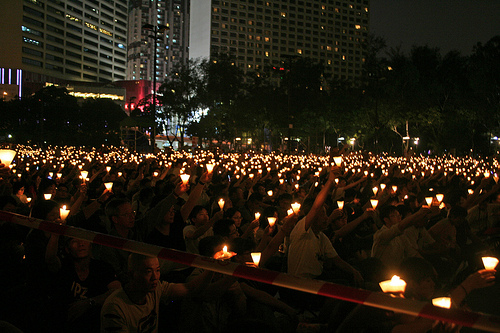 These vigils, unique in the world, are more than just commemorations. They have, over the years, fostered a linkage between demanding for redress for past and present human rights abuses and pressing for a democratic future.11

Though increased Hong Kong civic engagement and participation by mainlanders12 may account for the rising number of participants in June Fourth vigils since 2009, Hong Kong Alliance organizers observe that the young people of Hong Kong—particularly those born after 1980 and 1990, known as the “post-80s” and “post-90s”—constitute a significant part of the increase.13 Former Hong Kong Alliance Vice-chairman Lee Cheuk-yan (李卓人) told South China Morning Post in June 2010, “About 70 percent of participants are young people below the age of 30—the group we call the post-80s generation.”14 Surveys support the organizers’ observation: In 2010, a poll of participants at the candlelight vigil by the University of Hong Kong Public Opinion Programme (HKU POP) found that 54 percent were under 30, and in 2011, the HKU POP poll found that 58 percent were.15

Following the June Fourth Festival for the Post-80s Generation in May-June 2010, other youths also embraced the “post-80s” identification, as evidenced in actions such as the Post-80s Anti-Express Railway Group (八十後反高鐵青年)16 and Post-80s Youth Against Unrightful Authority (八十後反特權青年).17 The term “post-80s” has been used increasingly to signify socially-conscious Hong Kong youths concerned with mainland affairs and who are connected via online social networks. These post-80s and post-90s—are the same youths who join student unions—the Hong Kong Federation of Students (香港專上學生聯) and individual university and secondary school student groups. They are also involved with independent media such as InMediaHK and Citizens’ Radio, giving out publications and adding their voices to the demand for government accountability for June Fourth.18

But these young Hong Kongers are not alone. Increasingly, their mainland counterparts, including mainland students studying abroad, have begun speaking out about June Fourth and about the importance of a democratic future for China.19

For many of these young people, commemorating June Fourth is more than about demanding justice for past human rights violations. Activist Joshua Wong, a leader of the anti-national education group Scholarism who participated in the May 27, 2012 June Fourth protest march, told iSunAffairs, “Why do I want June Fourth to be redressed? Because I want there to be democracy in China . . . . We still have a bit of freedom of speech and assembly in Hong Kong. Since we still can commemorate June Fourth, we will be able to hold fast and go on to the next step, to fight for democracy in Hong Kong, and in China.”20

3. Barbara Basler, “UPHEAVAL IN CHINA; Hong Kong Turns Out in Protest against Its Once and Future Ruler,” The New York Times, May 21, 1989, http://www.nytimes.com/1989/05/21/world/upheaval-china-hong-kong-turns-protest-against-its-once-future-ruler.html.^

4. The Hong Kong Alliance in Support of Patriotic Democratic Movements in China, “Our Story,” http://www.alliance.org.hk/english/The_Alliance/our_story.html.^