Take a Photo, Save a Child

On January 17, 2011, Hong Yuping (洪玉萍), from Fujian Province, contacted Yu Jianrong (于建嵘), at the Chinese Academy of Social Sciences (CASS), about her family’s plight and requested assistance: In June 2009, their son, Yang Weixin (杨伟鑫), then age six, was abducted from their hometown, Quanzhou, and they had been searching for him ever since.1 In early 2010, Hong had recognized Yang Weixin in a photo of three children begging outside a Xiamen train station that she happened to see online; she and her husband raced to Xiamen, but was unable to find him. Yu, Director of the Center for the Study of Social Problems at the Rural Development Institute of CASS and a leading voice on education, poverty, and rural issues, posted a request on his Sina Weibo account @于建嵘 asking his followers to help with the search. Many people came forward with questions, clues, and suggestions for helping children who were begging on the streets or who had been taken from their parents.2 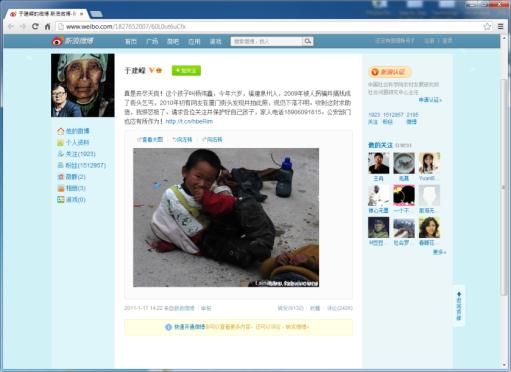 Yu realized that posting on a microblog photographs of child beggars who may have been trafficked and those who had been abducted would reach a wide audience, and thus an effective way to raise awareness of child begging, and might even help reunite families. “Micro-blogging may help put an end to the phenomenon of using children to beg," Yu told China Daily in a 2011 interview. “It also adds an immense social pressure against trafficking of children.”3 On January 25, 2012, he registered the Sina Weibo account Take a Photo, Save a Child (随手拍照解救乞讨儿童), and the campaign was born.

There are no Chinese official statistics on the number of children abducted each year in China.4 But the U.S. Department of State estimates the annual figure at 20,000.5 Children are stolen not for ransom but to be trafficked, sold into forced labor including begging, stealing, and working in brick kilns and coal mines, or sold to families seeking children or spouses for their children.6 The Chinese Ministry of Public Security has run regular anti-human trafficking campaigns and works with civil society groups to identify parents looking for their missing children.7 The Ministry said that it rescued 8,660 abducted children during its 2011 campaign.8

Within 24 hours of Yu Jianrong opening the Take a Photo, Save a Child account, over 7,000 users began following it.9 As of November 19, 2012, it has almost 218,000 followers and over 8,200 posts. Although Hong Yuping has not yet found her son (the child in the photo she saw in early 2012 was a child of a begging family),10 others have been more successful. Just days after the launch of the campaign, People’s Daily’s online portal reported that by February 8, 2011, six trafficked children had been rescued thanks to the Take a Photo campaign.11 Another group, Baobeihuijia (宝贝回家), or “Baby, Come Home,” formed in 2007, reports that 555 families have been reunited with its help.

It is difficult to calculate exactly how many children Take a Photo, Save a Child has helped take off the streets and away from a childhood of begging, or reunited with the families they have lost, since the campaign coincides with the national anti-trafficking campaign, and parents and netizens tend to contact as many groups as possible when they are looking for abducted children or see beggar children on the streets. However, Yu Jianrong would note that that is not the true aim of the campaign. Yu has responded to criticism of the campaign, “We are not an anti-trafficking campaign, because children begging on the street may not necessarily have been trafficked. Our aim is for these children to no longer beg and receive assistance from society.”12 When asked by Southern Metropolis Daily what he hoped the campaign could achieve, Yu said, “Our ultimate goal is to reduce and thoroughly eliminate child begging by means of institutional building and civic participation. We hope that by promoting legislation, strict procedures for investigating and saving child beggars  can be drafted so that child begging can no longer be a profitable market.”13