Václav Havel on Liu Xiaobo, “Charter 08”, and the Struggle for Democratic Reform

On January 19, 2010, Václav Havel—playwright and former dissident who became the last president of Czechoslovakia and later the first president of the Czech Republic—spoke with HRIC executive director Sharon Hom about Liu Xiaobo, Charter 08, and the difficult process of democratic reform in communist systems. Havel was a drafter of Charter 77, a manifesto calling for human rights and political reform in the former Czechoslovakia, which inspired Charter 08. Havel has been a vocal supporter of Liu since Liu’s detention in December 2008. On January 6, 2010, Havel co-signed with two other former Czech dissidents an open letter addressed to Chinese president Hu Jintao to protest Liu’s “inciting subversion of state power” conviction and 11-year prison sentence. When the three went to the Chinese Embassy in Prague to deliver the letter, no one came to answer the door. Havel has also, along with Archbishop Desmond Tutu and the Dalai Lama, both Nobel Peace Prize laureates, and others, jointly called for the nomination of Liu for the Nobel Peace Prize. (The appeal has since been followed by a formal nomination letter by PEN American Center president Kwame Anthony Appiah to the Nobel Committee, endorsed by other writers including Salman Rushdie, Ian Buruma, and Ha Jin.) In reaction, the spokesman for the Chinese Foreign Ministry was quoted as saying on February 2: “If the Nobel Peace Prize is awarded to such a person, it is obvious that it is totally wrong.”

Sharon Hom: I thought we might start by looking back at the former Czechoslovakia in 1977; could you share some of the challenges that the Charter 77 movement faced? We’re particularly interested in examples of international action that you found, at that time, helpful both to you and to the Charter 77 movement.

Václav Havel: The Charter 77 people, I myself, and all political prisoners enjoyed political support and solidarity that were very helpful because they gave us a sense of purpose for doing our work. I think [the support and solidarity were] important for two reasons. First, it is important to encourage the political prisoners and to make sure that they know that they are not by themselves, that the world knows about them, and that the work [they are doing] has a certain meaning. And the other important reason is that this action makes the government know it can’t just do whatever it wishes.

That’s why it’s up to us—who have lived through those times and those experiences, [whose] conditions have changed now that we have been released—to be among the first ones to show solidarity with those who are persecuted for the same reasons. And that’s why we are interested in the [Liu Xiaobo] case and that’s why, for example, within the EU, we are trying to point out the most severe cases.

Sharon Hom: I was very struck by your writing about this kind of legacy, the baggage that a society and people who come out of the communist totalitarian system carry. Some of that legacy is the lack of trust, or fear, and that is very true for China too, which suffered sixty years of Communist rule and the Cultural Revolution, which destroyed the whole social fabric. So individuals like Liu Xiaobo and other writers or journalists, or artists, and rights defense lawyers who speak out know they’re taking great risks. If you look at the Czechoslovakia of 1977 and China today, how would you compare the different tools of control and repression used in Czechoslovakia then, and in China now?

Václav Havel: There are of course big differences and similarities as well. The similarities, I would say, are in the basic structure of human rights reflected in a democratic system, which of course the regime doesn’t want. The regime wishes for the dictatorship of one party. I think this is where Charter 08 and Charter 77 are similar: they have similar targets and similar messages to deliver to the [respective] regimes.

I had an interesting experience when I was in the U.S. a long time [ago]. I organized some sort of public gathering of dissidents from many countries. I mean there were dissidents present from China, from Iran, from Cuba. It was some sort of international gathering of people who knew what they wanted. And it was very interesting to see how they all understood each other. Even though [they came from] regimes with different ideologies, still it was always the same [things] at stake, mainly, assuming power, and rejection of basic human rights, the freedom of expression and freedom of assembly.

The regime wishes for the dictatorship of one party. I think this is where Charter 08 and Charter 77 are similar: they have similar targets and similar messages to deliver to the [respective] regimes.

Now the differences are that during Charter 77, Czechoslovakia was in an inconspicuous and slow decline, whereas China is growing and developing, on a steep rise. The other difference is, of course, that we are a small country, whereas China is a superpower, a member of the Security Council, and it thinks it can dare [to do whatever] as a result. For a long time, I thought that dictatorship could not coexist with market economy, but now it seems [in fact] they coexist [quite well] in China, and now, the question is whether it will last or not, whether the market economy will then force changes in the system. So either they can go together, or perhaps it’s just a temporary phenomenon, and market freedom will [eventually] force other changes to happen.

Sharon Hom: But perhaps what’s developing in China is not really a market economy, but a market economy with “Chinese characteristics”—an economy controlled still by the Party, one grappling with rampant corruption. But if there is no accountability and no transparency, there will also be no protection of human rights or economic rights either. So I think that’s an ongoing debate in China today.

China today not only has economic and political power, but also soft power, such as through the media. We push the EU, we push national governments, and the UN. But they, including the Human Rights Council, are not very effective. And you personally have written Op/Ed pieces, took part in an award ceremony to recognize Chinese rights defenders, and most recently wrote an open letter to the Chinese president, Hu Jintao. You’ve done quite a bit.

Do you have any thoughts about how you can take what you’ve done to get more international leaders to take concrete actions? 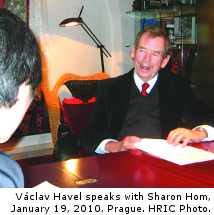 Václav Havel: Well, that’s a very profound and fundamental question. I mean, why is the world always so cautious in the name of economic interests, always shutting its eyes when it comes to human rights?

I think there are very profound reasons why this happens. I think this has probably been a policy of some kind of appeasement or some kind of compromise, which is of course very dangerous.

So, I think what will have to happen is either some kind of bigger crisis or some bigger catastrophe that will then wake up the politicians. Or on the other hand, changes could be achieved by some permanent and persistent pressure exerted by intellectuals and politicians, pressure exerted by the EU, [for example,] as we are members of the EU.

I myself, in a recent speech in front of the European Parliament on the anniversary of the collapse of the iron curtain, specified the importance of solidarity. I [believe that] to exert pressure on the European Union [and] on the UN is very important.

Sharon Hom: One of the lessons that you pointed out in Charter 77 was that a legitimate government cannot use intimidation, repression, and propaganda. And you pointed out recently that China does not appear to have learned this lesson. In 1990 you wrote that if you have confidence you can be more tolerant. I think that is what we don’t see in China: a confident government that can trust its own people so that it can be tolerant.

Charter 77 was very important to Liu Xiaobo and Charter 08; they even used the word “charter” in Chinese to echo it and that must have been incredibly threatening to the Party in China. Because we all know what happened after Charter 77, raising the possibility of a peaceful revolution in China and the possibility to move on to a more democratic future. I think that’s why they couldn’t answer the door at the Chinese Embassy in Prague: they don’t want that future and they’re not welcoming that future knocking on the door.

But in 1989 when you came out of prison and heard about the violent government crackdown on unarmed civilians—do you recall your reaction at the time?

Václav Havel: Well, I remember the massacre on Tiananmen Square . . . it really outraged me. I tried to seize every opportunity to talk about it on the radio, in the media. The attention wasn’t so [great] here, because we were too much looking into ourselves and looking into our own troubles. I was talking about it on the radio, and all the editors were shocked I was bringing it up.

Sharon Hom: We spoke to family members and we told them that you agreed to speak to us. They were very, very moved, and thanked you for the support because it’s a very difficult time for the family. You have already delivered a very strong message to the Chinese government, and issued a very strong call to the international community to take responsibility. What message would you like to send to Liu Xia, the family, and to Liu Xiaobo and the rights defenders in China?

Sharon Hom: Your words will give Liu’s family and lawyers great support and encouragement. Liu’s case is clearly about more than one person; it’s about the future of freedom of expression and of this Charter 08 movement in China. So, thank you again for taking the time to speak with me. It has been a great honor and pleasure.