Defense Statement of the First Instance 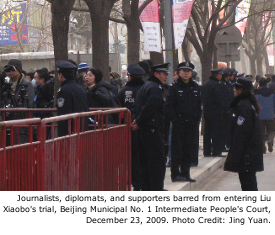 We have been retained by Liu Xiaobo, the defendant in this case, and designated by the Beijing Mo Shaoping Law Firm, to act as the defense counsel on behalf of the defendant Liu Xiaobo, [who has been] charged with the crime of “inciting subversion of state power.” We will faithfully carry out the duties stipulated in Article 35 of the Criminal Procedure Law of the People’s Republic of China (hereinafter referred to as the Criminal Procedure Law) and defend the legal rights and interests of Liu Xiaobo in accordance with the law. After being retained, we met with Liu Xiaobo many times, reviewed in detail the evidentiary material that the Procuratorate sent to the Court, and have just participated in the court investigation, court hearing, and the questioning of witnesses, which have allowed us to further our understanding of the true circumstances of this case. Based on our respect for truth and evidence, and in accordance with the relevant provisions of the law, we put forward the following defense opinions, to be used as a reference by the collegiate bench during its deliberations.

The defense counsel contend that there is no difference of opinion between the prosecution and the defense on the basic facts of the case (namely, the six articles listed in the Indictment, such as “The CPC’s Dictatorial Patriotism,” published on websites such as those of Observe China and the Chinese edition of the BBC, were written by Liu Xiaobo, and Liu Xiaobo, as one of the drafters of Charter 08, published Charter 08 on the overseas websites of Democratic China [www.minzhuzhongguo.org] and Independent Chinese Pen Center [www.chinesepen.org] (the only point of objection to the facts is that Liu Xiaobo collected only over 70 signatures, not “more than 300” as charged by the Indictment). The main difference of opinion between prosecution  and defense in this case lies in the applicability of law, namely, whether the articles Liu Xiaobo published and Charter 08 that he drafted fall in the category of the citizens’ [rights to] freedom of speech and expression, or whether they constitute the crime of inciting subversion of state power. In addition, the defense counsel contend that serious procedural flaws exist in the course of investigation, indictment hearings, and the trial of this case. Following is an elaboration of the details:

II. The charges against Liu Xiaobo in the Indictment are too “sweeping” and “take things out of context.”

III. The charges in the Indictment have blurred the boundaries between citizens’ freedom of speech and criminal offense.

IV. There were significant flaws in the investigation, procuracy review and indictment, and trial processes.

The Honorable Presiding Judge and Judges,

Our country is in the process of steadily improving the rule of law. During this process, it is perfectly normal for there to be a difference in opinion on some issues, and particularly so when it comes to dealing with certain questions of guilt and innocence. But the defense counsel firmly insist that a verdict that contributes to the respect for and guarantee of basic human rights, including the freedom of speech, will be a fair and just verdict, a verdict that will withstand the test of history!

We earnestly request that the Beijing Municipal No. 1 Intermediate People’s Court give sufficient consideration to the opinions of the defense counsel and render a not-guilty verdict to Liu Xiaobo on the basis of the facts and in accordance with the law.

1. All emphasis from source text. ^